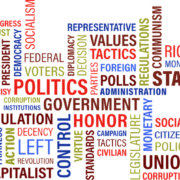 I come from a little country in the heart of the Europe called Czech Republic. From my stand point you could say that what happened during the election for the 45th president of the United States doesn’t really concern me.

Not only because I remotely work for a US incorporated firm, but because you guys are the biggest player in the formation of the free world. And the free world is turning red as I write these lines…

I don’t know much about the US though. I’ve lived in Albuquerque, New Mexico for two months and for almost 4 months in Mountain View in California. From both experiences I gathered, that I only scraped the surface of what your normal, down to earth US mind-set is about.

As pretty much as the rest of the world, I know you guys mostly from TV. There is one more TV series that comes in mind on a day like this:

This show has a few characteristics:

Now while this series turned out to be very popular, Netflix didn’t stop there.

They recently released a similar series:

This series has completely opposite characteristics:

What Netflix is doing is clear, they are A/B testing. Not just the release tactics but also the narrative. The bad guy is Variant A and the good one is B.

The beauty of continuous A/B testing is that even though you waste a lot of time and resources on the variant that turns out to be worse, you keep things in balance.

And that’s exactly what we need right now. A world in balance.

Right now we have only A variants

4 years ago my country, Czech Republic, went through something pretty similar to what you’re experiencing right now. A surprise, shock even, created by the people who live among us, my nation.

Back then it we came up with the idea to have a direct presidential election, quite like the ones you have (minus the Electoral College, which kinda blew it for you guys for the fifth time if I’m counting correctly).

During our first ever direct presidential election, we too had a pretty in tense campaign, and a rather tight finale.

Long story short, we, as a nation, 55% to 45%, chose a president, who is a representing us in a quite peculiar manner. Even though i didn’t vote for him, we chose him and we have to deal with it not for 4 years, but for 5 years.

This year, my second home country, the European Union got a painful slap in the face. The folks in the United Kingdom had a great idea to organize a public chat about leaving the EU. The result? Brexit.

And today, you guys, as the leader of the free world, just unbalanced things some more.

Businesses already know, that betting everything on red, doesn’t pay off. It’s time we consider the doing the same in politics.

Instead of thinking about jumping ship and buying one way plane tickets, we might start thinking about how we, as people and as nations can add some B variants to renew the balance, which we’ve been enjoying since the late 80’s.

About the author: Matouš Roskovec

Matous Roskovec currently works as a Content Marketing Manager at Avocode. He studied philosophy and semiotics at Charles University in Prague, Media & Comm at DMU in Leicester and he also went through the 500 Startups Seed Program in Mountain View. Prior to his current job, he has been working as a copywriter under the brand SEE. He has been writing copy for GE Aviation, DPD, Allianz and was a member of Red Bull Digital Media Board.

This article was first published by Matouš Roskovec

I Just Did A Launch With No Webinars, No Videos, No Multimedia. Here’s What...