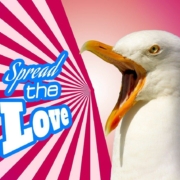 Let’s talk about my favourite ad campaign from 2020.

Forcing products down your throat that you have no interest in. All while making you wait for your favourite programs, how dare they?

Not so much of an issue now but long before the glory days of Sky or Freeview. Back when there was no way of forwarding through the adverts with the flick of a switch. When an ad break was used to quickly make a cup of tea or to make a mad dash to the toilet. Back then, adverts were a lot less popular!

Now, this was back when there were only four channels to choose from. However, since then, advertising campaigns have gotten so much better. They’ve only gone from strength to strength (obviously not all of them).

They’ve veered from being not only informative, but they now include humour. Both dark and light humour. And they are clever, memorable and at times, strike a chord.

Who doesn’t love a bit of Snoop?

My favourite advert campaign from 2020, and some of you may have guessed it, is the Just Eat advert featuring Mr. Cool himself, Snoop Dog.

I don’t like this advert solely because it features Snoop Dog (although it does make it cool and gives it a certain je ne sais quai), it’s more the thought behind it that Just Eat has gone to when considering the advert and the thinking behind their choice.

Mr. Dog, despite his reputation proceeding him, must also come with a hefty price tag, which would have taken great consideration. I mean, imagine if you made the decision and for some crazy reason it fails, well there’s still a hefty wad of cash to pay, regardless of the conversion rate.

Essentially, it must take balls to make that kind of decision (which I admire), no matter who the celeb, it’s a choice attached to a lot of money. I bet whoever made the decision breathed a sigh of relief when the campaign was a success.

The advert is catchy and in a non-annoying way.

I need only think of the words Just Eat and, in my head, I am instantly singing the song, which is great branding.

The tune itself is also far less annoying than certain other brands out there; I mean the kind that gets stuck in your head all day long! Calgon is just one example that comes to mind.

Personally, as a foodie, I find the advert oddly comforting and it does its job, it makes me hungry (great for them but not for me) and the food they show is mouth-wateringly delicious.

Even though I know that I won’t receive the food of that calibre (or portion size), it still makes me fancy a takeaway and encourages me to order through them.

I saw it daily! The advert was everywhere, and more importantly, everywhere at the right times.

I won’t eat a takeaway in the morning or afternoon, unless it’s leftovers, which if hungover (happening far less since hitting my mid-thirties) makes for an unhealthy start to the day.

I won’t order a takeaway until the evening; my point is that they hit their target market and at the right times.

I think as a copywriter that I appreciate adverts in different ways.

I like the advert because it’s clever, well thought out and because I think they made a really good choice.

It’s popular and without a doubt will have raised brand awareness and it has resulted in a significant increase to their conversion rate. The advert has done its job and I have no doubt that it has more than paid for itself and probably continues to do so.

It has been a success, a case of money well-spent on a well-targeted campaign (I can imagine the corporate big wigs at Just Eat making it rain), allowing them to reach their target audience, which obviously includes me!

Another reason for the advert’s success is that this is one of the first times that Snoop Dog has featured in an advert aired in the UK, making it more memorable.

Over in the US, not only has Snoop appeared in a few other advert campaigns but for other prominent fast-food companies, essentially what Just Eat view as their potential competitors if they’re not being used by them, however, he hasn’t done so over here so the advert packs more of a punch. It makes it hard to forget.

Just Eat has also capitalised and built upon the advert’s success with their 2020 Christmas campaign. Something that was probably already in the pipeline before Snoop signed the contract. But the point is that it strengthens the campaign.

From their ad campaign I feel that they have a very clever Marketing team, I mean, they must do!

2020 was a horrific year, the year of a pandemic like we have never faced before, which continues to this day. I think this is why they took the risk of paying such a hefty price for Mr Snoop Dog himself.

They saw a gap in the market and capitalised upon it. With people under lockdown, unable to frequent food places as they normally would, they came up with a great advert campaign. Which of course was far more costly (I mean, we’re talking millions) but it helped to outshine their competitors.

Now, I have no confirmation from Snoop himself (I wish). But it appears that he was paid £5.3 million for his part in the Just Eat ad campaign.

The ad campaign does exactly what it is meant to, it ticks every box.

I admire the thought process behind the campaign. The fact that they saw a gap in the market and thought, ‘right we can fill this gap. We just need to make the right impact and stand out from our competitors’.

This cleverness helped to make sure that they didn’t make a loss during the pandemic, they made a profit! They were already big players, but their year-to-date orders rose by 27% to 123.2 million. Wowzer (not a word I normally use but somehow, it’s the only word that seems fitting)!

As I said, they utilised last year’s situation and without a doubt used it to their advantage.

The advert’s great and their Marketing department have done brilliantly, well done, them.

The only thing that taints it slightly is that by already being the big players that they are, they of course have an unfair advantage. They can afford a major celeb with a Midas touch proving the theory that ‘it takes money to make money’.

Saying that though, if you have the right skills, you can of course create your own kick-ass ad campaign. However, it goes without saying that a bucket load of cash and Snoop Dog’s agent on speed dial would be a great help.

Continue Reading: The evolution of advertising