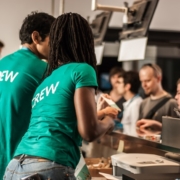 Do you ever put things off?

Sound familiar? I bet it does. And there’s a scientific reason your brain lets you put it off when it doesn’t have a deadline.In basic terms (and I’m sure it’s much more complicated than this, but I prefer to try to understand the simplistic explanation) your brain has 3 separate areas:

The reptilian brain is the oldest part of the three. It was developed millions of years ago and is the part of the brain which is concerned with survival and avoiding pain.

The limbic brain emerged in the first mammals and is responsible for controlling emotions in human beings.

The neocortex first developed in primates and culminated in the human brain. This is the part which sets us apart from other species, and is responsible for the development of human language, imagination, and consciousness.

But what does that have to do with deadlines?

The best way I can understand it is to think of it as if it’s a battle between your reptilian brain and your neocortex.

Your neocortex on the other hand is the sensible part of the brain – the part which knows that the work should really be done.

When you have no deadline the reptilian brain wins. It convinces you not to do that difficult task or start that complicated activity. Your neocortex loses and you end up putting it off and doing something else instead – something more enjoyable and less ‘painful‘ – it’s the science behind why we procrastinate. Think about it next time you’re looking through LinkedIn posts instead of typing up the minutes of that meeting you attended!

So how does setting a deadline change things?

When you set a deadline your reptilian brain senses a new type of potential pain – the pain of the consequences of missing the deadline. That may be the consequences of explaining to your colleagues why you’ve missed the deadline, or even worse your line manager. As a result, instead of fighting against your neocortex, your reptilian brain works with it, and convinces it that you need to take care of that piece of work or activity to avoid the pain of missing the deadline. So you find a way to plan to meet the deadline. You put the required steps in place to achieve it.

And how did Jake Blues benefit from it?

In the cult classic movie ‘The Blues Brothers‘, Jake Blues and his brother Elwood reunite their rhythm and blues band and organize a concert to earn $5,000 needed to pay their old orphanage’s tax bill. Their inspiration to ‘put the band back together’ comes when Jake, played by the late John Belushi, ‘sees the light’ and realises what they must do.But it’s only when they set the date, and announce it from a megaphone attached to their car that ultimately makes it happen. And when they’ve set the date, they’re committed, and subsequently piece the band back together – A-list member by A-list member, and that magical concert finally happens …

What has it got to do with your productivity?

I have a colleague who is excellent at planning work, arranging priorities, and getting things done – whenever I brief a piece of work in for her team to help me with, I often state the ‘required by’ date as ‘as soon as possible’ – her reaction? – to replace the ‘as soon as possible’ with a firm date. Her justification is that if it states ‘as soon as possible’, then it will keep getting put back as no-one will see the urgency. And she’s absolutely right.

Think of all the things you know you have to do but haven’t yet set deadlines for. All the things you’ve been putting off because they’re not urgent. That just makes it easy for your reptilian brain to win out and convince you to keep putting it off. Give your neocortex a chance – don’t let your reptilian brain win – set a deadline and let the 2 parts of your brain work together.

So what then does all this have to do with my new blog??

I’ve attended a few excellent training sessions in the last few months, and two in particular struck a proverbial chord and inspired me to start my own blog (thanks @SueAllport and @KateHargreaves).

The first was a copywriting course which opened up an old desire I’d suppressed for writing. The second was a team personality profiling session where we were tasked with putting 5 items in a box that represent your life – a tougher task than it sounds – and a task which gave me inspiration for a few regular features for inclusion.

The problem is though that I’ve been writing for a fair few weeks now, but keep tweaking, tinkering and finding things to change without putting it live. So I decided to do something to stop my reptilian brain from overpowering my neocortex, and encourage the two to work together – I set a date.

And like the Blues Brothers – it’s only when you tell others about that date that you’ll make it happen – I just hope that those who read it will have a slither of the reaction the crowd had when the Blues Brothers put on their concert and played that excellent rendition of ‘Everybody needs somebody to love‘!

About the author: Stephen Smith

Steve is a marketing manager with 10 years of experience working in the construction industry and 5 years working in the automotive industry for global market leading organisations.

He has degree in business, a Chartered Institute of Marketing diploma in marketing, and is currently working as market development manager for a global manufacturer of construction products with a focus on the use of insight and intelligence.

Knowing a lot of people who run their own business, Steve sees how hard it can be for someone to specialise in each and every area of business, and so launched 80from20.com to try to capture the latest sales and marketing techniques that actually work, with input from real people with real experience.

He has a passion for great movies, sports and poker, which can also all include great lessons for business!

This article was first published by Stephen Smith