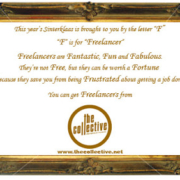 So the festive season is once again upon us. Hurrah!
Here in The Netherlands we’ve already been festive for a while, having welcomed the arrival of Sinterklaas and Zwarte Piet at the end of November.
Not wanting to miss out on the commercial opportunities afforded by traditional celebrations, The Collective sent 2 copies of its very own Zwarte Piet out on the road. Armed with sackfulls of pepernoten, bottles of port and customised chocolate letter “F”s, our dynamic duo spent a couple of days delivering sugar-laden treats to Amsterdam-based clients.
The things we do to get you work! 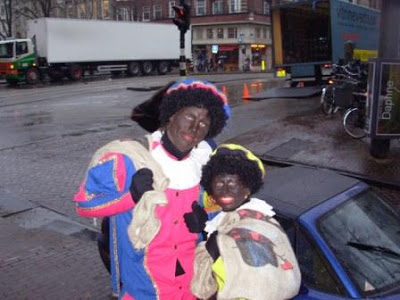 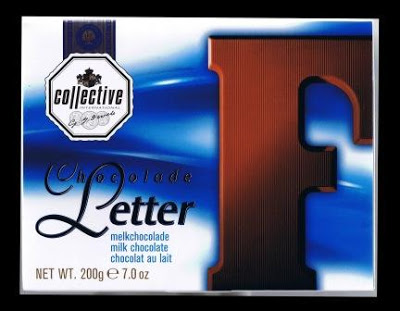 Custom chocolate letters by that well-known chocolate manufacturer, Collective.
Any why did we give an “F”? Well that’s a long story to do with a problem at the Droste factory which resulted in a shortage of our most obvious choice, “C”. (Poor Casper was out of luck this year.) But necessity, as they say, is the mother of invention so we didn’t miss a trick in justifying our substitute selection by presenting the following card together with the chocolate. 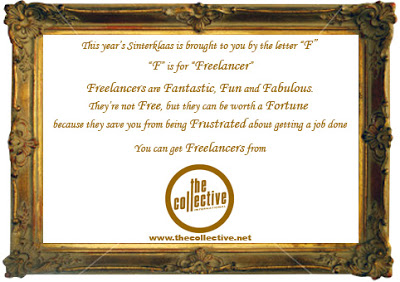 Christmas dinner
It was great to see so many of you at last night’s Christmas dinner.
Congratulations to our award winners:
Erik Rolf – Quickest response times
Fraser Bailey – Fastest phone calls
Cathy Scott – most blatant party animal
Next year it could be you – we’re watching you…
If you enjoyed the wine you can thank Fraser for his selection. If you had a hangover after drinking wine at the party then you can blame Fraser.
If anybody has any pics to share, please let us know.
A job opportunity

The study Interactive / Media / Design at the Royal Academy of Art in The Hague is looking for people who can teach within one of the following disciplines:
Interaction design
Concept development
Cross media
Story telling & scripting
Media theory / media history
Marketing
Writing
They need people for the second semester of the second year (starts end of January/beginning February 2008) and for the first semester of the third year (starts September 2008).

If you or anybody you know is interested then please get in touch with us.
Message from across the pond
While Jack was having a quiet pint in a bar in Dallas (as one does) he was approached by a man who turned out to be none other than David Shanks. Coincidence or what? If you don’t know David then don’t have nightmares about it, but if you do then he sends his regards.
Merry Xmas!
And with that all that remains is to wish you all a very merry Christmas or any other holiday you may be celebrating and a prosperous 2008.
The Collective Team