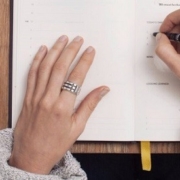 In the first in a series exploring an advertising creative’s occupational hazards:

Lorelei Mathias fesses up to a recent plunder (is that a pun within a pun?)…

So, as we know, punning is universally outlawed when writing copy. However, my problem is that, because I’ve taught myself to repress even the slightest whiff of a pun when thinking of ideas, the side effect is that now, as soon as I’m out the door my pun-reflexes go into overdrive. I’m suddenly propelled into thinking of the most awful pun-jokes all the time; in bars, restaurants, parties, wherever.

Like a more sinister kind of Tourettes, they just pop into my head and I feel compelled to release them.

Even though friends are accommodating and do laugh at some of them, it’s still a terrible affliction and one I’m forever apologizing for. It’s half due to my Romanian father and his uniquely cheesy (and often inappropriate) sense of humour. But it’s mainly to do with how my brain feels the need to do a kind of ‘pun-run’, to get them out my system before Monday morning comes around again.

There are many examples I could confess to but the most mortifying occurred when Nat (my creative partner) and I were at The Hospital Club Creative Awards, (we were there for the ‘Breakthrough creatives’ award or something – unsurprisingly we were pipped to the post by Duncan Jones). Anyway, my victim was an unsuspecting Alex James of Blur, stood next to me at the bar. As he was one of my childhood heroes, I decided to brave a hello, after which a friendly conversation ensued.

Everything was going fine until, ten minutes into the chat, the catastrophic nerve-induced pun reared its ugly head.

Lol: So, are you doing much music these days?

Awful. just awful. He was very nice about it although I’m still shuddering at the memory now. To make matters worse, I then tried to account for my pun, by blaming it on the fact I worked in advertising and that punning was outlawed. But he didn’t believe me. You see that’s the thing; as much as we all try and maintain that advertising ought not to be polluted with puns, the reality is that the general public (like some clients) still think a good ad must involve a nice juicy pun.

How to Update Your Website In Less Than An Hour