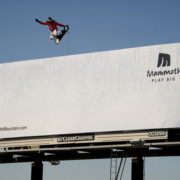 All advertisers understand the importance of making a connection with their audience. Without a connection, consumers will not respond to the advertisement, rendering it ineffective, no matter what the message is. In our advertisement-saturated society, it is becoming more and more difficult to catch the attention of consumers. In order to combat the growing apathy in the marketplace, some advertisers have resorted to what’s known as “extreme advertising”.
If you’ve seen Virgin Mobile’s newest slate of television commercials, you probably have taste of extreme advertising. Mirroring a run of Sprite ads from the middle of the last decade, these advertisements are a play on “brainwashing”: flashing suggestive images and commands onto the screen, intermingled with the Virgin Mobile logo and images of their CEO. These ads are intended to be amusing, but also to stick the brand name in the consumer’s head, therefore both winking at advertisements as a form of brainwashing but also effectively using the techniques to convince viewers to purchase their phone plans.
Comparatively, Virgin’s campaign is fairly tame. With far more creative, innovative and shocking ads in the market today, it’s clear that some advertisers will go to any length in order to engage with the consumer as well as ensure their advertisement sticks with the observer long after it leaves their view.

Bike-Powered Billboard
In an effort to both intrigue and engage with passersby, BC Hydro in Vancouver, British Columbia, set up a holiday-themed billboard, complete with a light-up Rudolf the Red-nose Reindeer. The twist, however, is that the reindeer’s light are powered by a bicycle at the base of the billboard. In order to get Rudolf to light up, someone has to ride the bicycle and power the generator, which hundreds of volunteers did. This whole scheme was to encourage residents to invest in alternative power sources, and whether or not it was successful, we don’t know. But we do know that setting up a campaign that literally relies on consumers for power, is extremely risky.

We’ve all heard the phrase, and even used it, on occasion, to keep our mothers from squeezing us into hideous holiday sweaters. But when Superette, the Australian fashion outlet, decided they needed a new advertising campaign, they found a humorous, if morbid way, to turn the phrase in their favor. Featuring a man hanging out of an elevator, blood dripping down his body into a pool on the floor, where his pug waits patiently, and the tag: “Be Caught Dead in It,” this advertisement is both shocking and humorous. The message is that unlike other stores, you’ll love your Superette clothes, even if you are caught dead in them.

Giant Dragon Skull
The riskiest and most creative extreme advertising provides very little reference back to their brand. These act like a puzzle, to get consumer interested, and make them fully engage with the advertisement in order to figure out the purpose of the ad. One of the most creative marketing stunts in recent years was for the third season of HBO’s Game of Thrones. The props department was enlisted to create a giant dragon skull, like the ones featured in the show, and then, in the dead of night, to leave it on one of England’s most popular beaches. For more than week, beach goers were amazed and intrigued by the skull, until the network finally took responsibility. The sheer scale of the project and the absence of any HBO or Game of Thrones logo is what makes this advertisement both extreme and effective.

Blurring Reality and Fiction
It was one of the first found-footage horror movies, which spawned a whole line of found-footage films, including the wildly popular Paranormal Activity. The Blair Witch Project, however, unlike the moves it inspired, was made by three film students, with almost no budget. In order to get people to watch their movie, they launched a massive and ingenious marketing campaign, one that not only built up their movie, but also built up the legend of the Blair Witch.
The film students posted authentic “Missing” posters for the three actors, and created a website to promote the story of the Witch. Even though it was completely fabricated, thousands of people believed the hype, and when the movie finally premiered, the tension and fear was compounded by many viewers’ belief that what they were seeing was real.
The extreme advertising of The Blair Witch Project is one of the best examples of extreme, cross-platform promotion, not only because it was incorporated several different types of media, and was pulled off by a group of students with almost no resources, but also because it was such a massive success. What other campaign can say they created an urban legend and got thousands of people to believe it, just to bring people to the theater?
[bra_button text=”Book this freelancer” url=”http://copywritercollective.com/contact/freelance-request/?myvar=Book this freelancer” target=”_self” size=”large” style=”” color=”pink”]