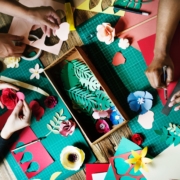 What does it mean to be “creative”? To be an “ideas person”? Or to be “artistic”? They’re just words aren’t they? Devoid of any real meaning.

As a Contenty-copywriter type, I often (to my delight) get pulled into creative meetings or idea generation sessions, as it is assumed I’ll be a valuable contributor. And whilst I’d love to think that’s all on me, in reality, I think it’s because my job role allows me to be “creative”. It is expected.

Creativity belongs to us all

Creativity is not a talent, it is an active craft. It’s all about being able to shift perspective and solve problems. And it isn’t and shouldn’t be pigeonholed to one industry or role. Dave gets it:

“Creativity isn’t a particular discipline. It’s the quality of originality and unexpectedness that you bring to whatever you do.” – Dave Trott in Creative Mischief

The importance of playfulness

It’s hard to actually define creativity, but in my opinion, it centres around playfulness. A quick check on Google offers “frivolity”, “silliness” and even “monkey business” as possible synonyms. But I mean playful in terms of toying with or manipulating something, pulling it apart and patching it back together.

Being playful in the workplace isn’t frivolous or silly, but a way of solving problems cleverly or building something that is original, whatever the project.

I did a module a few years back at university on Holocaust Literature which was as brutal as it sounds but fascinating. I did well on the final exam with the positive feedback that I had explored the books in question “playfully”.

I learnt that playfulness doesn’t have to be silly, but that it’s a method of finding new angles and ideas, whatever the subject matter.

The battle for the Great Idea

Playfulness may be a good method of “achieving” creativity, but it doesn’t guarantee results. When Mad Men‘s Creative Director, Don Draper, isn’t drinking or engaging in light misogyny, he broods away in his office until the idea miraculously comes to him.

“There is no algorithm that can tell us where it will come from and when it will hit”. – Tim Brown in Change by Design

Draper solves the day by having the ever-coveted lightbulb moment. But this is such bullshit. A fully-formed idea by one person is very rare. Also, the notion that there is one great idea is ridiculous.

In reality, idea generation is a lengthy process, involving a mix of different people and many, many, many iterations.

“To have a good idea, you must first have lots of ideas”. Linus Pauling, two-time Nobel Prize winner for Chemistry

Instead of ruthlessly pursuing the Great Idea, like a mighty but pointless hunt for Bigfoot or the Loch Ness monster, we should play our way to the Right Idea.

About the author: Ellie Hubble

Ellie is a creative strategist and writer, currently working as a copywriter for an eclectic mix of agencies and brands. When she’s not writing or cooking up ideas, she can usually be found exploring the city or escaping from it to the countryside.

This article was first published by Ellie Hubble