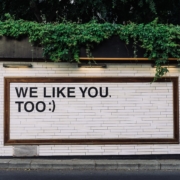 The way you and your co-workers communicate with customers has a huge influence on your business. As the Chinese proverb puts it, ‘A man without a smile on his face must not open a shop’. In recent encounters with the customer service departments of two major brands here in the Netherlands, I noticed seven communication habits I believe will result in more success and more fun for you and your company.

Here’s what happened. I contacted two well-known, market-leading companies to voice my disappointment with a product/service I had purchased from each. One is an online retailer, the other a telecom provider. Let’s call them Nice Incorporated and Nasty Unlimited. The Nasties, essentially, displayed disinterest, not to say annoyance, and lost my business – ignoring astonishing customer service statistics like these about the cost of poor customer service. The Nicies embraced the fact that customer experience is today’s battlefield: they demonstrated empathy, trust and responsibility, turning a potential critic into a happy ambassador.

Nasty Unlimited promised, in an automated email response to my query, to get back to me within three days. Seven days later, no news. I called. Bad decision: I got redirected from one desk to the next, until eventually a kind, but powerless employee suggested I resend my query to another email address. This first experience of the customer service at Nasty Unlimited was repeated throughout the entire process of complaint handling. I got really tired.

Compare Nice Incorporated. Within hours of having sent my complaint, I received a response that immediately addressed the issue and explained how the company was going to try and resolve it with me. Wow!

In terms of tone of voice, that first reply I got from the Nicies had everything the Nasty service lacked:

The Nasty response, when it came around ten days later, was, well, nasty:

–       They distrusted my explanation of the product failure, suggesting it was all my fault;

–       I was requested to better substantiate my complaint;

–       The ball was smashed back squarely into my court.

The key difference between Nice and Nasty in terms of promises and actions is that the Nice people took ownership of the problem: they considered it theirs, not mine. And they acted accordingly – showing urgency, precision and flexibility in getting it solved. Quite unlike the Nasties.

Nasty Unlimited forced me to contact them again and again at my own initiative – simply by failing to respond within the promised time frames, or with relevant replies.

Nice Incorporated emailed me almost daily. When it was my turn to act, they emailed to check whether I had understood the procedure or needed any help. When it was their turn, they wrote and told me they were on it and when I could expect results.

The initial experience with Nasty of being endlessly redirected to employees who were either careless or powerless to do anything was the exact opposite of the Nice approach. Throughout the process, each subsequent Nice message I received was undersigned by a different employee – but they all, without exception, displayed the same positive features as the first one:

+       They immediately addressed my issue;

+       Showed clearly that they knew and cared about what was going on;

+       Demonstrated confidence about their ability to fix the issue;

+       Again, signed their messages with first and last names, direct phone numbers and a reminder that they were eager to help whatever came up.

No one – at least no one in their right mind – enjoys having to phone or email a supplier to complain. And nobody likes being told their complaint is groundless. In the case of Nasty Unlimited, I put off writing the first e-mail for several days. When I finally sent it, I fervently hoped I’d be understood. Respected. Supported. None of that happened. My disappointment only grew.

The people at Nice Incorporated came alongside from the very first contact, exceeding my expectations right through to the final replacement – within a week – of not just the product component I had complained about, but the entire product, including its numerous accessories.

7.      A cheerful, generous attitude right to the end

The Nice messages and calls were personal and cheerful from beginning to end. When I wrote to thank them for the over-the-top replacement they sent, you can guess how they replied. Within a couple of hours, I received a gracious ‘You’re welcome’ and a cheery reminder to give a yell if there was anything else the company could do for me.

And Nasty Unlimited? I must admit that after several weeks of toing and froing they did solve the problem. But by then, they had created a far greater one: they lost my business.

The Chinese proverb I quoted above says it all, ‘A man without a smile on his face must not open a shop’. Humans are wired to help each other and to find fulfillment and success in that. It fuels our economies and helps us find meaning. So whether you are in customer service, sales, management, or are an entrepreneur, a leader or a parent, cultivate an attitude of cheerful and committed helpfulness. It will make everyone, including you, happier – and make you more successful in what you do.

The Chinese proverb says it all, ‘A man without a smile on his face must not open a shop’. Humans are wired to help each other and to find fulfilment and success in that.

About the author: Stephen Teeuwen

Stephen Teeuwen is a bilingual (English, Dutch) copywriter and concept developer with 30 years of experience spanning diverse media and almost every form of writing. Born in the UK, raised in Indonesia and living and working in the Netherlands, he is a conscientious observer who has worked as newspaper and television reporter, story producer, editor, scriptwriter, market researcher, author and communication advisor. Today he combines this experience in a thriving bilingual copywriting practice, where he also hires and develops young talent.

This article was first published by Stephen Teeuwen

*Meet Trish, one of our Berlin-based copywriters*

DIY advertisers: why titles don’t work, and headlines do