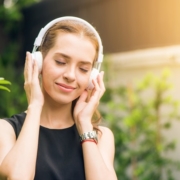 As any practitioner will tell you, producing advertising and corporate copy is an unremittingly joyless occupation. One consolation is that, when working at home for The Copywriter Collective, one can listen to the music of one’s choice without the need for headphones or whatever they’re called these days.

Music while you work: our thoughts

My own preference is for music that is intelligent but unobtrusive. Music that is quite slow and not too conventionally melodic. Thus I often work to dub, Russian Orthodox choral music and classical music such as Beethoven string quartets. Other options might be Mogwai and Tim Buckley’s Happy Sad. I also find the calming Twin Peaks music to be conducive to writing, especially if I’m angry (most of the time) or within earshot of building and renovat 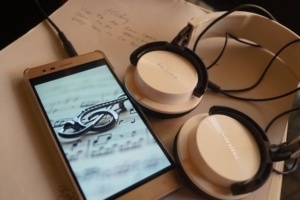 ion work (pretty much every day for the last ten years).

For me, all this music acts as ‘background music’ that does not interrupt thought processes with sudden interval leaps or speed changes. And it is often better than silence or the music such as Webern or Kate Bush’s Ariel as it blocks out sudden ambient noise which is the most disruptive of all noise. (You might have realized by now that I hate noise.)

One piece of music that doesn’t fill all the above criteria is Mozart’s Gran Partita KV 361 which is extremely melodic and quite intrusive. So I only listen to this inordinately beautiful music in December as it cheers me up at a time when I would prefer to be in an alcoholic, football-watching haze rather than working.

Purcell is another composer who doesn’t really fit the ‘intelligent but unobtrusive’ criteria but a few years ago I played his joyous music very loudly day after day as a calculated and contrasting riposte to the drills and torture instruments of the renovation workers hired by neighbours on all sides.

But what of other Copywriter Collective writers?

John, you are the ageless Mick Jagger of copywriting. Do you listen to Goats Head’s Soup on a loop as you write great copy for The Copywriter Collective? 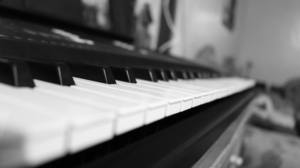 No. I never listen to music when I write. I prefer silence or noise. When I worked at Dentsu in Japan the office was so noisy I learned to zone it out. Eventually I learned to be inspired by it. I could work in a railway station at rush hour if I had to. There’s music in noise if you listen for it.

I often go to Centraal Station in between writing and look for filmic moments orchestrated by the cocophony of noise. I call this earballing: listening with my eyes; seeing with my ears.

There is one noise, however, that I cannot tolerate. Yes, it’s that deafening torrent, that Niagara Falls of din, the Amsterdam builder. They’re everywhere. Ripping out the pleasure of living here. Drilling down to the soul of the city and pouring concrete into it.

Like killer sharks, if they stop ‘swimming’ they die. So they put on their yellow hats and wellies, find your wall, your street, your way to work and deafen you with the clangour of their steam hammers. Followed by the staggering cha-ching of their cash registers. They’ve turned me into a babbling cynic. I can often be heard screaming in the middle of the night on the Brouwersgracht bridge: “You think the north-south metro will be finished by 2017? For only 3 billion of your tax euros? Ha! Haaa!”

So while I wait for someone to wake up from this madness and arrest them all, I listen to Captain Beefheart’s Pompadour Swamp from his Blue Jeans and Moonbeams album.

Cathy, you were always in the mosh pit whenever Mudhoney and Napalm Death Squad came to town. Do you find that you can listen to such music when crafting wonderful copy for The Copywriter Collective in Amsterdam?

Actually, I’ve never heard of these guys – fortunately – but remain totally enthralled by the gentility of crooners such as Tony Bennett, Nat King Cole and Charles Aznavour. Call me an old-fashioned girl, but their melodies whisk me away to a world of harmonious rhapsodies, encouraging my creativity to do a little dance and my fingers to type faster in delight. Aah.

Simon, I can imagine you working away for The Copywriter Collective with I Fought The Lowe on your stereo. Is that the case? 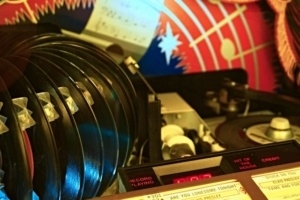 When I’m not writing and doing advertising, I play in two London bands, one rock covers, the other doing original psychedelic/prog stuff, and I was a professional opera chorus singer at one time, too. So my taste is fairly eclectic. My iPod’s shuffle might easily cook up a weird stew of Puccini, Porcupine Tree, Python and Pavarotti. When I’m concentrating I usually go for Philip Glass or Mozart or a favourite compilation of nature sounds… or silence. And in open-plan offices it’s anything that drowns out the babble on my Bose noise-cancelling headphones! I also listen thematically – on a recent job writing script for a movies client I listened to a lot of film music by people like John Barry and Danny Elfman. Naturally when I’m working for The Collective I choose Dutch music: Focus, Golden Earring and Bernard Haitinck conducting Parsifal …
;-)

So, Erik, I guess it’s Wreckless Eric on your iPod as you write wonderful Dutch concepts and copy for The Copywriter Collective, not to mention all those classic transcreations that so magically communicate not only the content but also the spirit of the original text.

Erik is the odd one out, as he is native Dutch. That doesn’t mean he listens to Dutch music though. With Erik, it depends what he is doing. If it is genuine writing – brochures, websites, interviews – he prefers silent solitude. No music, no people around, completely focussed on his keyboard and computer screen. If it is concepting with an art director, there usually is some noise on the background. Indie rock, like The Shins or Remy Zero. Or soundtracks, lots of soundtracks, like from the movie Garden State or 500 Days of Summer. Occasionaly Erik does do some lay-outs, and at these times he doesn’t need to be completely focussed. Then he plays the not very sophisticated type of music: Paul Simon or the Beastie Boys, preferably very loud. But as he is a writer, usually no music at all.

You can’t be a copywriter unless you’ve worked in advertising—or can ...