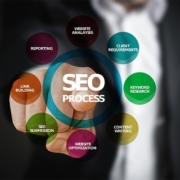 Terminators 1 and 2 were two of my favourite films growing up.

They did a good job of playing on those deep fears many of us have of autonomous beings. Terminators lacked any kind of emotion and arrived from the future to destroy us all with technology we invented. This got me thinking is this now the fate that awaits SEO copywriters or the huge numbers of people who now make their living writing for the Internet?


It’s hard to imagine now, but the Terminator films were released before the Internet age arrived and some time before the search engines, which are arguably the most advanced form of artificial intelligence we have today.

At least it’s still comforting to know that after years of work on robots, scientists and engineers are still unable to produce any kind of standing robot that doesn’t fall over let alone a Terminator. Correct me if I’m wrong but robots don’t have the ability to think for themselves, or do much of anything they haven’t already been programmed to do.

They are already at a stage where they can guess what we are looking for and know our history and pretty much everything that interests us simply by remembering what we search for online.

Terminators too learned everything about humans and used it to their advantage but they had their limitations and so do search engines. Search engines can only present things to us based on the information we give them. So in theory their complex algorithms are flawed, which is where SEOs and SEO copywriters come in.

The job of an SEO is to influence search engines and get content in front of people based on what they type in the search bar. Ideally this content should be showing up at or near the top of the search page. ‘SEO copywriting’ as it is called, plays a major part in this.

SEO copywriting is all about taking keywords and phrases that people use to search and working them into a web page, article or blog post while keeping the content readable.

You need a lot of this kind of  content on your website to achieve a high search ranking.This presents a problem for most small and medium sized businesses. How do you produce enough of it cheaply?

The temptation is to find something that produces lots of it efficiently and in a way that doesn’t alert the search engines that you are a spam merchant.

As someone who spends half my life writing content for other websites, I am as guilty as other SEO writers who sometimes find themselves overwhelmed and  hoping for a magic answer to creating content in sufficient volume. Human writers can only produce so much work. Hiring other writers to help is expensive. That’s just the way it is.

So it’s tempting to turn to semi automated tool to do the same job. Software developers are only to happy to oblige.

But is it really possible to use these tools to write posts on your blog or content for your web pages? Can software really produce work of the same quality as a human writer?

As a result of my quest to find out, I have looked into various software that makes bold claims about how far it can go in boosting the productivity of SEOs and Internet copywriters and make millions for marketers.

This is the original version of the robot writer. This technology has been in use for years now. What it does is allow you to steal a piece of content someone else has written, spin it around and make it your own.

There is just one problem with the content spinner. It used to work ok and became a part of the SEO tool kit. Now it doesn’t really work at all.

You can no longer spin articles and use link building software to auto post, it just doesn’t work and anyone using this tactic can end up with a penalty if any links are pointing directly at the money site.

The end product from spinners  does come out ‘unique’ but usually requires a lot of editing to be readable. It doesn’t do punctuation as well as a human writer and it can’t figure out the meaning of sentences.  Then Google came along with an algorithm update which was able to detect badly written content and that was that until…

Overcoming writer’s block: How to be creative when you are running out of...