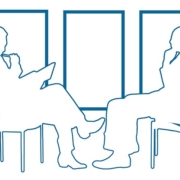 What’s your favorite type of project to work on?

Anything with elegant design and the ability to work conceptually. I’ve done a million websites but The Divining Rod Wine is my favorite recently because it’s gorgeous and they really wanted to stretch the writing. The tone is very different. I mean, how many wine websites talk about giant green fiberglass dinosaurs, phantoms and taking showers together?

What do you think makes good copywriting?

The same thing that makes for great talking. It’s smart. It’s funny. It’s conversational. It has rhythm and flow. It has an attitude. It considers its audience. It breaks a lot of English grammar rules by starting sentences with “And” or “But” and ending them with dangling participles and other no-nos that belong in school but not in advertising.

How much input do you usually have on the visuals that go with your copy? How much do you like to have? 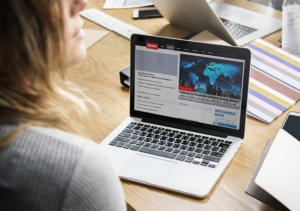 It depends on the project. Sometimes I come in at the end when visuals and layout are pretty set and I write to fit. Sometimes I get to partner with an art director or designer. Sometimes I work alone, in parallel with design but not together. Sometimes I’ve been asked to source images myself. Sometimes I’m consulted as a creative director and have input from the beginning.

I like to fit the project as needed, however, I’ll always prefer having input than not. I have never been known not to have an opinion so it’s nice when I get to collaborate. And I especially like when, as I call it, we throw out our titles. Meaning, an art director can crack a great headline and a writer can come up with a great visual. That’s the most fun. One of the greatest creative directors I worked with, Alan Randolph, says a good idea doesn’t care who has it. Truer words were never said.

How has copywriting changed during your career?

I started in print and direct marketing before there was a publicly available Internet and worked at Adobe on the team that released Acrobat 1.0 and the PDF. So you can imagine, it’s changed a lot in some ways. The biggest change has been the democratization of branding and advertising.

When I was in college, the Apple Lisa came out, introducing the graphical user interface to everyone. That was the start of desktop publishing, which took publishing from a solely commercial proposition to one you could do at home, with your own printer. The same has happened for music, photography, data. Even manufacturing is on the horizon with 3D printing.

And it’s happened with branding and marketing. The terms “personal brand” and “social media” come from a world in which everyone can go online, set up a presence and be available in a matter of hours–and is expected to do so. Now everyone is publishing all the time. It’s helped differentiate what professional copywriting looks like but also blurred the lines.

People have attempted to commoditize writing but so far, it hasn’t worked. You can buy copy by the pound for your blog or website but it’s terrible stuff. Until something overtakes the written word as our main interface online, good writing is still a requirement.

Of all the work in your portfolio, which piece is your favorite or which are you most proud of, and why?

I love the script I wrote for Alec Baldwin for Venture Card. It was during the height of 30 Rock‘s popularity so I wrote it like Jack Donaghy. It’s short, it’s super-promotional, it’s bad green-screen, but it was a fun exercise. There are a lot of stories that go with that project too. Because we weren’t sure until the last minute how much of Alec we were going to get, I wrote three entirely different scripts based on the same concept: one in which he’s videotaped, one where he’s a still image and scenes (hilariously) change around him, and one that’s just a voiceover. We got him on video at the last minute. He actually came to the set in his 30 Rock wardrobe and they used that. 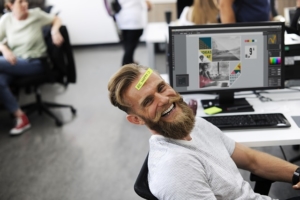 And I really love the print ads we did for Hu.mana because we really made the most of stock photography. We went from “how are we going to do this” to some pretty great ads that use low-cost stock. That’s creativity in a nutshell. Finding a way to make it happen.

What are your latest projects?

About the author: Karen Gordon Goldfarb

Karen is a freelance San Francisco Bay Area copywriter that can help you get more sales, more leads, more subscribers and more awareness for your brand and business.
Whether you’re local, across the nation or across the globe, she will give you solutions that help you succeed and drive your customers to take action.
From direct marketing to big ad campaigns, she uses the right words in an engaging, persuasive way (that’s copywriting) to get you leads, new customers, and repeat customers who buy again and again.

This article was first published by Karen Gordon Goldfarb