A friend of mine (a poet at heart) recently told me he was trying to write a poem, but hadn’t drafted anything he considered worthwhile. Or anything at all, really.

His reason? He had his heart set on writing a 30-line sonnet. And he hadn’t been able to pull it off yet.

Uh… what? I was startled. I’d never deliberately started a work with the idea it had to fit into a certain number of lines. Sure, I wrestle with word limits every day for clients, but creative writing? Free bird! Let the thoughts spill everywhere like buckets of bright paint. Swirl something awesome together afterwards. 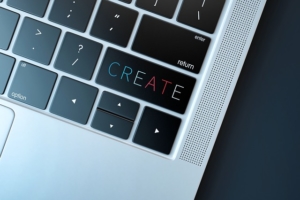 When it comes to the wordy world, I have a few quips to spare. So naturally, I hopped aboard my writerly soapbox. I explained that while I understood his reasons (sonnets are a noble enterprise), he’d surprised me. Why?

Because I’ve come to understand that when you’re writing or creating anything for your own ends, that’s YOU. 100% pure, unadulterated personal brain power. So why would you limit yourself, or try to cram yourself into a box? Yes, hammering out 30 lines worthy of Shakespeare is a great challenge… but you’re not being challenged if you’re too spooked to even put pen to paper.

You HAVE to give yourself space to grow, I told him, and spill over the edge of the box. What if 30 lines weren’t a fit for his creative flow? What if he was more of a 35 or 60-line guy (if there is such a thing)? How would he ever know?

And besides, I pointed out – creativity, on cue or otherwise, takes practice. You have to keep at it in order to find your strengths & passions. There are no short cuts or ‘magic formulas’, you’ve just gotta sit there and work at it until everything is finally out on the page, by golly.

Then it hit me: I fall into the same trap, over and over again.

Not with length (I’m far too comfortable with my verboseness for that), but style. There have been moments where I’ve had to put great books down because the work is so excellent, I need to take 5 and quietly despair at the abysmal quality of my own meager scribblings.

I’ve trashed innumerable drafts that didn’t sound ‘worthy’ to me – meaning they didn’t meet the expectations I’d outlined based on how I felt about a complete stranger and their work. How bizarre, to hate something we’ve made with our own hands just because it doesn’t resemble a vision that belonged to someone else’s to begin with.

I think every creative reaches a point where they’re so underwhelmed with themselves, they want to curl up in a ball and eat oreos on the couch for the rest of their days (guilty). Sometimes, we forget how heavy ideas can be. We have to haul them around with us everywhere we go, after all. And when we write, we’re basically asking our audience ‘Hey, this is mine, but will you carry it with you please?’

Of course you want to offer that idea in a beautiful package that proves you’re ‘good enough’, whatever that standard is for you. But if you’re consumed with concerns about your delivery, then you’re no longer focused on what’s in the box in the first place. Which is the truth you’re trying to convey.

Truth is the mighty engine that powers art. Not appearance.

Never forget that it’s the the statement, the honestly-formed idea, that fuels amazing creative work – not the way it’s “supposed” to sound or feel stylistically. Have you ever heard of a post going viral because ‘Omg, this sounds exactly like that awesome post so-and-so wrote.’? Didn’t think so. And besides, no truly great thoughts ever fit into the box set for them at the start.

Every artist needs to give themselves the freedom to evolve, and the chance to becomethe standard. And how do you do that? By proving your worth in the idea-fueled quality of the work you continually produce on your own – not disguised as someone else.

Art takes courage. Not the white knight riding in kind of courage, but the ‘Oh god, the spotlight is on me, I have only moments to get a point across and I can’t stop sweating in weird places’ kind. If you feel shy or unimpressed by yourself, it’s ok to feel that. But when your idea is a good one, when it’s true for you, when it’s something you need to say… you have permission from the muses to lean on that.

Let go of your expectations. Just start. Then keep going.

About the author: Hillary Weiss

Scribbler & giggler in a state of perpetual education. One half of Youngblood Sourcery, blogger at hillaryweiss.com

Introduction I’m Hillary Weiss.BY DAY…I’m the copywriter, editor, ghostwriter, and all-around scribbler for Youngblood Sourcery. I help small n’ mighty businesses & superstar solopreneurs (like you) get seen & heard with the help of words that lift hearts, blow minds, and get results!
BY NIGHT…I’m still all of those things – it’s just dark outside.
I work alongside folks who rep a rainbow of industries and extraordinary gifts;coaches, media mavens, clairvoyants, health gurus, artists, Etsy sellers, spiritual teachers, and authors, to name a few.
The joy my work brings to me is beyond words. I do more than just string together pretty sentences for websites. I’m part sage scripter of soul power, part inspirational thunderbolt-thrower and part co-pilot on your road to clarity. Every syllable is crafted with the laser focus and love.
Let’s bring your work to life.
Click here to view the original post by Hillary Weiss
November 28, 2014/by Hillary Weiss
https://copywritercollective.com/wp-content/uploads/2017/10/expectations-creative-hurdle-copywriter-collective.gif 266 400 Hillary Weiss https://copywritercollective.com/wp-content/uploads/2019/05/logo-copywriter-collective.png Hillary Weiss2014-11-28 09:11:342019-07-12 07:34:39Expectations: the great creative hurdle
Hire a freelance copywriter Get your copywriting course