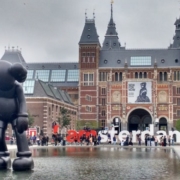 Thinking of copywriting in Amsterdam – or somewhere else in the Netherlands?

Want to work as a freelance creative? There are lots of possibilities for those keen to make the jump, here are some insights to make the landing easier.

How to be a freelancer in Amsterdam

Firstly we assume that you already have experience in another country working in an advertising agency or as a freelancer. Making a start in a new country is hard enough, but if you also want to try a new career it’s doubly difficult. Don’t think that just because you’re native-English and everyone is Dutch that you can make it as a copywriter. There are already lots of English copywriters in the Netherlands. That’s not to say it can’t be done. It’s just more difficult without a portfolio and proven experience.

(We also assume you’re coming from an EU country. If you’re from outside the EU and don’t have a European passport or work visa, it’s a whole different ball game and there’s no space for going into that here. Again, it’s possible but a lot more difficult.)

Depending on your experience you’ll first want to make a tour of the agencies. If you’re a young hotshot team with a few years under your belt already, you get an appointment at places like Wieden & Kennedy, 180, KesselsKramer, StrawberryFrog, Amsterdam Worldwide or Taxi. It can be hard just to get an appointment even if you’ve got an excellent book, so also try smaller hot shops like They, Selmore, N=5, Sid Lee, AKQA or Achtung.

Your best bet is to get the latest copy of Adformatie, the Dutch ad rag, or search their website to find agencies. It’s in Dutch but you’ve got to start learning the language sometime. The WKs and 180s all work in English, but smaller shops are Dutch. If you get offered a full-time position, take it. It’s much easier to work as a freelancer when you have contacts, and the best way to get contacts is to have worked in the industry. Here are some other tips:

If you can get someone else, who already has contacts and knows the scene, to do the work of showing you around, so much the better. Approaching an agent is easy – they’re open to new contacts – but getting signed up can be more difficult because they usually already have a full-roster and want to give work to those freelancers who are already loyal to them.

Besides The Collective, which specialises in native-English copywriters, here are some other freelance agents in the Netherlands you can visit:

Hunkydory: The oldest agent in the Netherlands, it represents exclusively Dutch copywriters, art directors, designers and DTPers. They are very established and have good contacts with the agencies, so are not active with advertising or other initiatives.

Mach1: Younger than Hunkydory but older than The Collective, Mach 1 has more of an online, crossmedia focus. So as well as copywriters and art directors, they also have web developers and game designers. They have three English copywriters but their focus is on the Netherlands and Amsterdam in particular.

The Free Force: This is not an agent but a group of freelancers who joined together to promote themselves. There’s no commission – only donations to UNICEF – so it’s a worthwhile organisation. Membership is by invitation only though, so try to make friends with other freelancers on the site if you’re keen on joining.

Don’t restrict yourself to just meeting agencies and agents. The more people you meet, the more contacts you make, the more likely you are to find work. It’s a small world and someone’s brother or best friend could have some design work that could pay next months rent for you. There are freelance meetup group you can go to and the couchsurfing group is very active in Amsterdam, which is a good way to meet other expats.

Once you are up and running and the jobs are coming in, you will have to send invoices out. It’s all by the book in Holland so you will need to register with the tax authorities and apply for a VAR. There are expat tax organisations who will help you with your accounts but a better tip would be to get a local accountant like Raad Amsterdam, who are used to dealing with freelancers (The Collective recommends them).

The Collective is an agent for international copywriters, art directors and designers. It services clients across Europe but is based in Amsterdam.