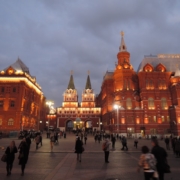 What makes it so bad?

Russia is a huge developing market and it’s experiencing a consumer boom. Nearly all international brands have already jumped in. Visit Moscow – and you will easily feel this rush, this flow of free money everywhere. Advertising budgets are enormous; salaries in the industry may exceed those in UK. One would expect to see some decent advertising. But the fact is it can hardly be found anywhere in today’s Russia.

You don’t have to just take my word for it, there’s plenty of proof around. Firstly, Russia’s collection of Cannes Lions and other prestigious awards is almost non-existent. Secondly, local creatives themselves never miss a chance to criticize the overall level of Russian advertising in their Internet communities and forums and to ask for a thousandth time the rhetorical question: “When will we start making such award winning ads here?”.

Everyone, naturally, has someone to blame, be it bosses, clients or TA. The site AdMe regularly invites prominent Western professionals to express their opinion on Russian advertising. Believe me, you don’t want to be a Russian creative reading one of these reviews.

It took me a while to understand why things are so bad for the Russian ad industry. I only came to a conclusion after spending thousands of hours creating ads for this market, talking to clients, tracking numerous campaigns – and not before I looked around Russia, at Belarus, Ukraine and the Baltic States. It allowed me to see a clear division: Russian and Belarussian advertising is awful, Ukrainian is much better and the three small Baltic States simply rock. Can the exact match with the politics be a coincidence? I mean, Russia and Belarus are experiencing a rollback to the totalitarian rule – and it happened before the westernization in these countries made any considerable progress. Ukraine had stumbled a few times on this rocky road but today its advance seems fast and secured. Meanwhile the Baltic States long ago become truly European.

There’s this fundamental division: Western individualism and humanism against totalitarian collectivism. In the West we put an individual in the center in every sense. We make it our idol. In my opinion, that’s where the roots of modern Western advertising are. We cherish the individual and thus we are eager to learn his psychology, to understand his true needs, which, as we know, are more emotional than rational. Western advertising makes its progress constantly looking for even more subtle and advanced emotional insights and techniques. This is our path.

But it is clearly not the case in Russia. They are just unwilling to dig deep enough. Talking to Russian creatives, I often sense their disregard or even contempt for that guy, the average consumer. You can’t make good advertising that way. Of course, clients are plagued with the same problem. At the end we have ads that are coarse, arrogant and overall weird for the Western eye. Nothing alike the subtlety, warmth and wit that we see in today’s Western advertising.

Another problem is that the consumer him/herself is not ready yet for different advertising. It takes two to tango towards Western cultural codes. So the international advertiser who is trying to crack the Russian market faces a tough choice: to just adapt the copy or to create a standalone Russian campaign with one of the local agencies. Neither alternative seems ideal to me. Probably, the right thing to do would be to somehow make two agencies, the Western and the Russian, to work together – and to hope for the best.

Being a travel writer: Is it all it’s cracked up to be?
Scroll to top /n/r/n/r