I live in Rome, Italy.

Everything starts with the first step at the IED in Rome where I start from the theory.

Three years passed and in 2000, a good number for a start, I went to practice and entered Conquest Materia Roma. After having pigeon-holed a series of “ops” typical of interns, everything became clear.

At this point, I stepped into McCann Erickson Rome and the game started to get really fun. Right on the most beautiful, I moved to Leo Burnett Rome where my adult copy work began.

I got on the wave and migrate to Leo Milano for 3 years. But Rome was there and so I decided that freelancing could be a new beginning. So it was. 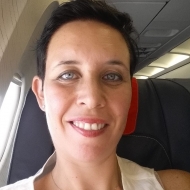 Want to see more Italian creative copywriters like Gaia? Here are some suggestions:

Creative copywriter needed? Gaia is the writer for you

So you’re looking to hire the best freelance creative copywriter you can find? Gaia is one of the most experienced writers in Rome, with many years of experience working freelance across Italy.

Her areas of expertise include Automotive, Financial and IT, although she has worked in many more sectors, and is willing and able to learn more about the area you operate in.

Still want to see more profiles? Visit this page creative copywriter to see trusted copywriters with similar skills to Gaia. Or simply send us a message and one of our agents will search our extensive database to find the perfect writer for your project.