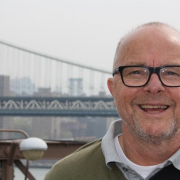 “You’re ready for a Daewoo.”

That’s the phrase that kicked my career as an advertising creative into high gear.

We are in the mid-90s of the last century. The Korean car brand Daewoo presents itself and its first two models in Europe. And for the introduction of the Daewoo Nexia and Espero on the Dutch market, the Koreans are looking for a Dutch advertising agency with its own vision on marketing and communication.

After the usual pitch, they finally choose LaMarque. A young, hip and happening advertising agency in Amsterdam, where I started as a junior copywriter the year before. And where I can now increasingly get involved in the real work. Real concepts, real campaigns and real lyrics. Likewise for Daewoo (you have to be lucky in life) when we actually started working for them. And so we went. With one campaign after another.

A small selection? The Daewoo Appraisal Team. The Daewoo License Plate Show. The Daewoo test driver. And more such thematic action campaigns. Which were remarkably innovative for the advertising world, which turned out to be extremely successful and which also won us countless advertising prizes. For example, to name one, we received a Golden Effie for the “Appraisal Team Campaign”.

When you said “Advertising prices” at the time, you immediately said “Headhunters”. They were immediately on the phone with the slightest success. That they like your job so much. That they would like to speak to you. And that they want to introduce you to agencies that are even younger, hipper, and happening. Agencies with even better customers, with even more possibilities and with (undoubtedly) even more success. The temptation is great. Not to be resisted, actually. So there you go. Before you know it, you will be the creative director of, or at, a renowned agency and you create work for iconic brands such as Blue Band, Plus Supermarkt, and Nivea.

Because you will have to deal with more and more different obligations in your new position, you will also be less often involved in creative work. On a good day, you even realize that you are more involved in meeting rooms, presentations, and planes than in an inspiring concept job, an appealing campaign, or challenging text. That is the moment when you want to go back to where it all started. So there is only one thing to do: You let things go and continue as a one-man.

It is June 2016 when I start working for friendly agencies and companies. For brands such as Fiat, Alfa Romeo, Coop, Hema, and Passendlezen. And for friends and acquaintances with their own companies such as wijnweter.com, Jet, and Maxima4men.nl

What more could you wish for as an advertising creative? Nothing anyway! Concepts, ideas, campaigns. Writing scripts, manifestos, rationales, advertising texts. TVCs and radio commercials. Wobblers and banners. Folders and flyers. Brochures and mailings. Websites and Emails. Headings and payoffs. You can be so desperate for that!

How much does a copywriter cost?

WFH-copywritercollective The most simple, yet effective advice on working from home
Scroll to top /n/r/n/r